A caravanner since birth

Don has been a caravanner since birth. Well actually we think he was conceived in a caravan! Enough said about that! Don’s mother and father founded Liteweight Caravans in 1946 and Don was fully involved in the company from the time he left school.

When Marilyn met Don it didn’t take long for her to realise that “love this man, also meant love these caravans”. They’ve owned a huge number of caravans over the years, in all shapes and sizes but of course all of them Liteweights.

A chance find in a Plant nursery in Te Awamutu saw the beginning of their retro caravan passion as Don restored the last caravan built in the home garage before his father moved to a purpose-built factory in Riverlea Road in Hamilton. This became the home of Liteweight for the next 34 years. That’s our 1956 Kiwi outside the factory, with the caravan, awaiting pick up by Jack Norrie, its first owner. We know this as we found the original Electrical Warrant of Fitness on the back of the wardrobe when we were restoring it. It also had the chassis number – number 82.

Jack and his wife were great friends of Don’s parents, and keen members of the Waikato Caravan Club, which both families were members of. 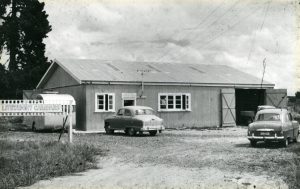 November 1956. Our 1956 Liteweight Kiwi outside the new factory. The Vanguard was the Jessen family car. The Mk I Zephyr was the builder’s car. The work pickup backed in the door was a 1948 Morris 8 Series E named Beetlebomb by the Jessen kids.